One of the writing prompts for Write 31 days asks for my "favorite family tradition." Really, who can choose a favorite of those??

It may not exactly be a family tradition, but there is one thing I am thankful for EVERY. SINGLE. DAY. and that is music. I'm pretty sure I have my Dad to thank for that. I just don't remember a time in my life when I wasn't hearing music.  In the beginning, it was my Dad's favorites that we listened to.   I could make a list of the artists I heard through my childhood from the record player and Daddy's large vinyl collection (or the oldies station).

I'm sure there are so many more because he had 8 tracks, vinyl albums, and cassettes.

My mom has told me most of my life how much I always  loved music.  Apparently, I used to walk around the house singing Crystal Gayle's "Don't It Make My Brown Eyes Blue" when I was less than 2 years old. I don't remember that, of course, but it's a great story. 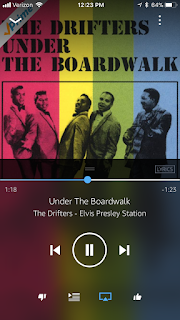 These days, one of the things I love most about my Amazon Prime membership is access to music and custom radio stations. It's really great when we're on vacation and I'm in a different musical mood everyday.  Today I wore my Elvis shirt, so I looked up an Elvis station on Amazon music.  AND what do you know?! There they all were: Elvis, Chuck Berry, Ritchie Valens, Buddy Holly, The Drifters, Johnny Cash, Jerry Lee Lewis, Dusty Springfield (I think the lone female artist that came up in the mix). Just listening to this station as I got ready to go today was a stroll down memory lane.  It was like the soundtrack of my childhood! It made me think of ways I might be able to share it with my Dad. (I can't say too much about that because it has me thinking on what I can get him for Christmas.)

Looking back, I remember how much I hated that the car radio was always tuned to Oldies 100.7.  I couldn't understand why we couldn't listen to "regular" music.  As much as a contradiction as it now seems, elementary school for me was equal parts New Edition, Madonna, and Whitney Houston with "Suspicious Minds," "Why Do Fools Fall in Love," and "Rockin' Robin" mixed in.
These days, I wouldn't have it any other way!

I realize that not everyone is as moved by music as I am.  Even so, I've begun teaching my kids about some great music and artists from before their times.  My kids love Aerosmith and Bon Jovi, but also recognize some Elvis, Hall & Oats, and *maybe* Michael Jackson.
As we ate dinner at a local pizza place tonight the song "The Day the Music Died" by Don McLean. I briefly told my kids about the plane crash that killed Ritchie Valens, Buddy Holly, and "The Big Bopper," inspiring the song. 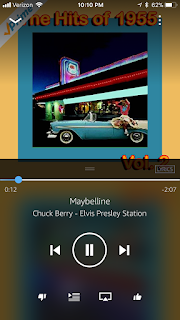 I think that's the reason music means so much for me: there's a story behind it and there are memories tied to it.  It's amazing how a song can just take me back to a different time when I used to listen to it or hear it all the time.  Sometimes if I close my eyes, I can almost feel what it felt like so many years ago when that same song played.

I know a lot of people are mourning the loss of Tom Petty right now.  It is a terrible and tragic loss and maybe that's another reason music has been such a theme for me today and yesterday. I'm not sure.
My kids don't know who Tom Petty is; I'm not sure I'm ready to explain "Last Dance with Mary Jane," you know?!

What about you? Do you have music that when you hear it instantly takes you back to another time? Isn't it great to have something so simple to evoke fond memories?!

P.S.  And just in case you thought Alan Jackson was the first to record "Summertime Blues," think again! Eddie Cochran originally recorded that song in 1958. I heard it today.

P.S.S.  If you've never really listened to the lyrics of "Shake, Rattle, & Roll," you should do it.  It might shock you! I was a little offended today but I don't want to spoil it for you :-)

Posted by leslie@gleaninggrace at 10:14 PM 2 comments: