I know I  have been very absent here.  No excuses! Any of you who have full lives with husbands, kids, jobs, etc. already understand.  I do promise to try harder and hopefully I have some readers left :-)

I have been struggling with all things "political"for at least 6 months now, and it wasn't just the presidential race. My state had a vote on a marriage amendment a few months back and unfortunately, I lost some friends over that one (not by my choice).  I've written and re-written many a blog post in my head but never quite put it to paper. Today, I am changing that and asking for God's guidance as I say what is on my heart albeit with the fear of offending those with opposing views.  I do realize that particular accomplishment may be an impossibility, but I will try just the same.

In regard to the recent election, I am mourning.  Disappointed doesn't even begin to cover my feelings on the subject and I hope to show you why.

I've heard a lot to the tune of "can't we all just get along" recently.  I think it's great that many are speaking out for peace and "working across the aisles." As someone from the "losing party" though, here is how I feel. It struck me most recently in the phrase: "God Bless America."

And He has blessed America; hopefully blessings will continue in the future.  Many people choose to blame God for every natural disaster, death or disappointment in their lives, while the simple fact is this: God hasn't forgotten America, America has forgotten God. The same people who willingly say "God Bless America" are often those rallying to remove God from the pledge of allegiance.  They are the ones shouting "Separation of Church and State" anytime they are uncomfortable with prayer or scripture reading in a "public place" or by a public entity.  By the way, that is a gross misinterpretation of what Thomas Jefferson intended when he coined the phrase.  BUT that's a post for another time.

Despite the arguments that exist out there, my research tells me that this country WAS founded on the God of Christianity but also on the freedom to worship (or not worship) that God as we choose.  And without a religion or set of beliefs being forced on us by our government as it is in some countries.

As a Christian, I cannot elect and therefore support a candidate/platform that does not have God's law (the ultimate law) at the root of their beliefs and governing nature.  I do agree with you that the election is over and it's time to move past that.  I also believe what the Bible says about government: as long as they aren't asking or requiring me to do something that violates God's laws, I am to obey them.  Support them even; pray for guidance for their leadership and their families.

While that feels difficult at this point, it is still my intention.  There is no need for ugliness and name-calling.  But whether you identify most with liberal groups or conservative groups, the rules should be the same for all.  I realize conservatives have been responsible for some of the ugliness, but not all of us.  It is especially disheartening, frustrating, and even maddening to me that the very liberals who say they want coexistence, tolerance, and equality, are the ones screaming obscenities and words like ignorant (the nice ones) or even stupid (or worse) at those who feel otherwise.

You know being Christian and/or Conservative does not mean we don't want to also love others and be tolerant; the exact opposite as a matter of fact.  Here’s what appears to be a point of dissent: being silent about something that violates God’s law is an approval of that sin.  That doesn’t mean screaming and Bible beating should ensue; the Bible says to reach out and correct in love, a concept most of us understand but have difficulty executing.  This verse comes to mind here: Galatians 6:1 "Brothers and sisters, if someone is caught in a sin, you who live by the Spirit should restore that person gently. But watch yourselves, or you also may be tempted."

So to give some examples, adultery is a sin; homosexuality is a sin; lying is a sin.  To God, sin is sin, and none of us is blameless.  If I, however, ignore a sin and say nothing of it, I am essentially an accomplice.  I am voicing my approval by saying nothing. It doesn't mean i hate the person committing the sin; this is where the saying, "Love the sinner, Hate the sin" originated I think.

As a Christian, I don't claim to be perfect.  I am imperfect in every way; sometimes judgemental or hypocritical though I don't intend to be.  Sometimes self-righteous though my desire is to be anything but! I simply desire to live my life as best I can according to God's plan, knowing that my rewards will be in Heaven.  Who wouldn't want that for ALL their friends and family?

Sometimes expressing that desire in the right way for the other person is the hardest part. 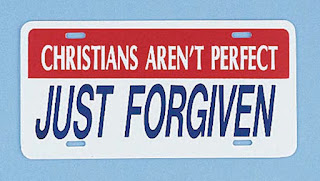 Posted by leslie@gleaninggrace at 12:46 PM