The Prompts:
1.) Write about a time you shoved someone.
2.) If you were a hoarder, based on your personality…what would you hoard? (better yet, ask someone who knows you well, what they think you would hoard).
3.) First day of school pictures…let’s have’em!
4.) 911 memories.
5.) Your summer recap in a poem and pictures.
Hmmm...a time I shoved someone?
Well I grew up with two younger brothers so I am quite certain I shoved at least one of them more times than I can count (you know who you are :-) Sorry, bro; in my defense, you probably shoved/ hit/held me down me way more than I ever did you so therefore you deserved it, right?)
Any who...
there is this one incident I keep remembering and as I clear away the fog, it wasn't really a shove.
I was in the 7th grade, which at the time, in my town/ school system was part of middle school.  There was a separate school for Jr. High and another for High School and yet another for K thru 6.  I know! Confusing, right?
There was this girl bully who obviously had some home issues.  EVERYONE was scared of her; truthfully, so was I.  She was rough; got suspended, started fights (or finished them, depending on your perspective), AND there were lots of rumors about her family.  In fact, everyone in town with THAT last name, was "known" to be wealthy from a less-than-respectable business.
For some reason, one day Bobbi (not her real name), started a conversation about whose a** she could kick.
Like it was 20 questions or something...
she would throw out a name and I was supposed to say yes or no.  So most of my answers were "I don't know" accompanied by shoulder shrugs.
Eventually, we got to the million dollar question, "What about you? Do you think I can kick your a**?"
Determined to not show fear and perhaps psych her out a little, my response, "I don't know, but if you think you're so bad, why don't you come on?!"
Where that came from, I'll never know! I guess I figured someone had to stand up to her eventually.
So anyway, she jumps out of her seat and proceeds to stand over me.
Again in an effort to remain in control and not let her intimidate me, I chose to remain seated.
She wrapped her hand around the front of my neck, so I proceeded to do the same.  As we each held the other at arm's length with one hand, she taunted me to go ahead and hit her.  I was smarter than that!
I was waiting for her to make the first move, take the first punch- whatever!
She finally did hit me; more of a slap really and I immediately repeated the motion against her face.  Only with her, she saw it coming and moved/ ducked so I sort of hit her on the head instead.  As soon as I did that, she dropped her hands and sat back down.
Honestly, I don't think she thought I would do it.  I doubt anybody, other than another member of her rough and tumble family, had EVER stood up to her before.
Of course in the weeks and months to come, anyone who had witnessed it told it very differently.
My not standing up? That was because I was a coward, not because I refused to let her intimidate me.
My slap? Completely non-existent.  I became known as "the girl Bobbi slapped."
It was hard to swallow then (not that I was ever a popular kid anyway), but looking back I don't regret the way I handled the situation.
OK! So maybe sometimes I wish I'd really beat the snot out of her! BUT looking back, it wouldn't have changed anything.
And I came across a great quote today that I can apply here:
"Remove those 'I want you to like me' stickers from your forehead and, instead, place them where they truly will do the most good - on your mirror!" -Susan Jeffers

Because, really, at the end of every day isn't it much more important that I like me than who else does?
Isn't it far more meaningful what I think of my thoughts and actions than speculating what others think? 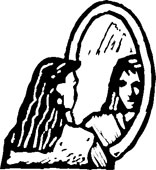