In anticipation of my baby girl's 7th birthday, I am sharing her birth story. If you missed the first two installments,  read them here and here.

Last time, I finished up with the administering of an epidural and pitocin to get things moving along.
AND the moving was SSLLLOOOOOWWW!

Every so often the nurse would come in and check me, the doctor on call would pop in and say hello; with the "drugs" I was probably the happiest I had been since 6 weeks of pregnancy (when morning sickness set in)!
I knew I was having a baby SOONER rather than later; I could watch the contractions on the screen without experiencing the discomfort of them; and overall, though exhausted, I was pretty comfortable.

And so it went: a centimeter here, a half centimeter there.
By now, my parents and in-laws had arrived.  My co-workers had been informed.  My dutiful husband had made all the necessary calls once the sun was up and timing was more appropriate.
My Mom and Mother-in-Law were both light-hearted and trying to make me laugh, though I was clearly getting anxious.

Eight hours after starting pitocin, I was still only dilated to 6 cm.
The nurses and doctors were getting concerned; I'd been in labor for 16 hours already but wasn't dilated enough to push.  Her head wasn't even really "engaged" in the birth canal.
They begin to mention the dreaded C word - CESAREAN!

AND that brought more tears.
I asked why?!
I protested! Can't we wait a little longer?
I was warned about the risk of infection for me and for her.
I prayed!
I prayed harder!

The decision had to be made (albeit most of it wasn't really up to me).  The nurses tried to be comforting...they said things like "Honey, you can't help it if your body isn't cooperating!"

Really? That's supposed to make me feel better?
I'm lying here, 50 pounds heavier than before I was pregnant, feeling like a blimp, knowing my HIPS have always been my biggest -ahem- asset, and you're telling me my baby CAN'T come through them?

The doctor on call already a scheduled C-section. He left me with the understanding that when he got out of that surgery, if I hadn't dramatically progressed, we'd all be going back into the OR.

That hour and a half or two hour period, whatever it was, I prayed and I pleaded.  I begged God to please let me get her out "normally!"
I bartered! I promised Him, if he would do just this one thing for me, I would take better care of myself the next pregnancy, etc., etc., etc...

So the minutes and seconds on the clock ticked by...
Even as I told our parents about it, I didn't actually believe I would end up having a C-section.

BUT, that is exactly what happened.

They came back in, checked me (still not over 6 cm) and started prepping me for surgery.
My epidural was cranked up so that I was pretty much numb from the chest down ~ kind of a scary feeling the first time you experience it.

And it is sort of a blur here...I was obviously anxious, scared, weepy...
I do remember the complete LOSS of modesty...sort of felt like road kill sprawled out on the operating table in all the non-glory that was my nine month pregnant body.
I remember that crazy curtain they put up between my abdomen and my face - as if I were too stupid to know they were about to remove not only my baby but also many of my organs in this process.
My poor husband! Not usually squeemish, but I really don't think he wanted to see his wife dismantled in the process of removing his first child.

I did get a verbal play-by-play from the doctor:
"Ok- I'm making the first incision; please tell me if you can feel anything."
"You're gonna feel some pressure; we need to press down on your belly to get to the uterus and the baby" (THAT hurt like hell by the way).

I'm sure he also gave some updates as he saw her; as he pulled her out...but I didn't hear anything else once I knew he was close to her.
I was listening...
with every ounce of power I had in my bloated body...
where was it?
I just wanted to hear IT!
That first audible "glimpse" of her "voice..."

Where was it?
And then I heard it!
The sweetest sound I'd ever heard in my entire life to this point!
"WAAAGGHH! WAAAGGHH!"

And that was it! I was bawling! I was in love!
I just wanted these people to stitch me up or staple me up or what the heck ever and let me hold her!

I had to settle for Daddy holding her and bringing her around to my face...on the way, I heard him say to her "Why wouldn't you come out?!"
This sweet sentiment that totally told me and her (though she still will not know it for years) how badly he wanted her to be here.
How long he'd wanted to hold her, waited to hold her...
This man who had NEVER held a baby before, was now holding his first child, OUR first child in his arms.
And I knew she was safe.
And I knew it was okay that I had to wait to hold her.

So that's it!
She started out a Daddy's girl, and to this day she still is!
The nurses were so captivated with his first-time-Daddy sweetness, that they took lots of pictures of him like this: 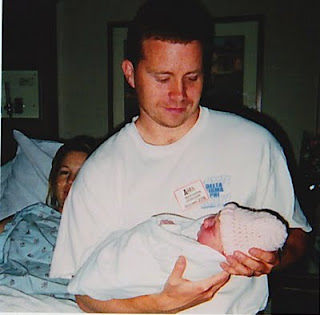 I love you so much Sweet Pea!
Can't believe it's been 7 years!


Posted by leslie@gleaninggrace at 1:51 PM