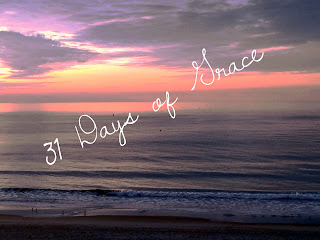 I have all sorts of post ideas bouncing around in my head...it can get sort of confusing, really.
But to avoid confusing you, I'll finish this 31 Days series before I start in on something else.

When we last talked, I'd walked down the aisle and become E's wife.
It rained on my wedding day, but I was told that was good luck.

He had made all the arrangements for our honeymoon, so while I knew we were heading to Jamaica the next day, I didn't know the specifics.

He had communicated with the travel agent in setting everything up.  By the time we left the wedding, drove back to Raleigh and the hotel, it was late.  We had to get settled and into bed quickly, because we had an early flight the next morning (or so we thought).

We got up early, repacked our bags and headed off to the airport for our 8am flight out of RDU to Miami.
When we showed up at the airport, we were informed our flight wasn't actually supposed to leave for several more hours.
Luckily, there were open seats on an earlier flight to Miami; the airline just couldn't guarantee us an earlier flight OUT of Miami to Jamaica.
So we left (did I mention this was the first time I had EVER flown?)...

arrived in Miami, only to find out, we couldn't get an earlier flight.
We were stuck in that airport for about 6 hours awaiting our original connecting flight.
I have to say: it wasn't the way to start a honeymoon, or a marriage!
By the time we got on the second plane that day, we were on each other's last nerve!

Somehow we actually made it to Jamaica (no thanks to my freak out on the runway as we lifted off from Miami), and had a grand week at the Sandals resort.

Looking back, it's hard to believe that was almost 13 years ago.  In some ways, it feels like yesterday; in others, it seems like much more than 13 years because we've grown and changed so much - both as individuals and as a couple.

The first year of marriage brought challenges for sure but, honestly, I remember very few of them right now.
The ONE that I will never forget is John coming back into our lives.

We'd been married 6-9 months.  I'd changed jobs from retail management to banking the month before we got married.
I'd had time to settle in and make new friends.
One of the things I loved about working for the bank, was I got to learn lots of new things.  I worked in 3 different branches in those first 8 or 9 months, partially because I received 2 (small) promotions.

At my second location, I really developed friendships that were special to me (one is still a dear friend today :-) ).  It's also the job that taught me to love coffee, which I never drank before.
This second location was also instrumental in another area of my life - my weight!

While many brides try desperately to lose weight before the wedding, I did not.  Not that I didn't desperately WANT to lose weight, I just tend to go the opposite way with stress (I gain instead of lose).
In my first month at this new branch of the bank, someone suggested a weight-loss challenge with a weekly weigh-in.  The coworker I am still friends with, was pregnant with her first child at the time; since she couldn't participate, she was the weight taker and tracker.
I cannot remember how long the challenge was for but guess what? I won!
I only lost 12 to 15 pounds during the challenge, but afterwards, I decided to keep going.  It was my first experience with the Weight Watchers points program, and by Christmas that year I'd lost 40 pounds.  I was excited!

Anyway, somewhere around Spring 2001, I got a strange phone call at work.  I was now working as a supervisor at my third branch of the same bank.  The voice on the other end of the phone asked how long we were open that day; it sounded ridiculously familiar, but I shook it off.

TO BE CONTINUED...
Posted by leslie@gleaninggrace at 12:38 AM