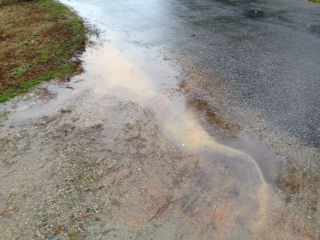 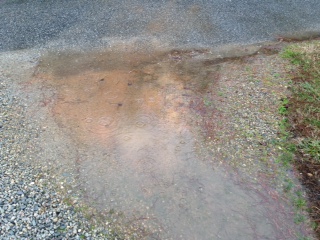 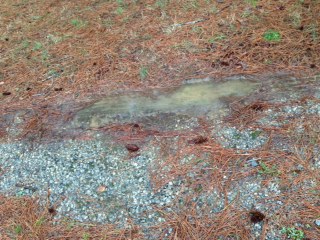 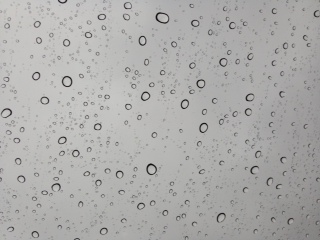 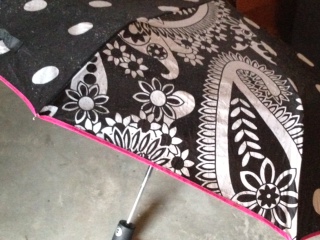 Yesterday was the kind of day where I was really grateful for umbrellas...
it was cold, wet and windy all day.

It actually fit my mood quite well.  As much as I know I need this digging into my past in order to move forward a little more freely, I cannot help but feel as if I am drowning.

I look back on that girl, the one that was me, and I just want to shake her, slap her, somehow work some sense into her!

I can see from afar how destructive my self-talk and low self-esteem were.  I can see, while I must take responsibility for my poor choices, there were so many factors in those poor choices.  I almost pity her - that sad girl, who let other people, situations, MEN, define her.  That never liked herself enough and so she always wanted to be sure everyone else liked her.

Friends, that is a slippery slope! Trying to BE everything, or worse - everyONE, to EVERYONE - it can't work. How can I know who ME really is, if ME keeps changing depending on who I am with?

So, see? This is helpful for me, but I do want to get it over with, so let's go back.  Back to my sophomore year in college...

John and I had recently gotten back together after our second breakup.  We celebrated Valentine's Day together and he gave me a ring - not a diamond, but I think it was meant as a promise ring.

I'll have to glaze over most of the details of the rest of that year, though, because quite frankly, I don't remember many of them.  It was a lot of blah, blah, blah and yada, yada, yada.

I remember that was the year that I official changed my major from engineering to English (no offense, but what was I thinking?), and then promptly to Marine and Coastal resources (just enough math and science to keep me challenged but not kill my GPA J). Also, John graduated in December and had gone back home (about an hour away) and begun working full time.

The summer after my sophomore year was also rather significant.

On the advice of some friends at The Baptist Student Union (BSU), I interviewed for a missions position with The Baptist State Convention.  The offer was to be part of a 4 person missionary team in inner city Durham, NC supported by a local Baptist Association.

The head of the association was our contact, whom we saw at least weekly.  Among our responsibilities for the summer were: leading Vacation Bible Schools at some of the local association churches, attend most of the churches in the association each Sunday (we were given a schedule of where to be and when), lead out door events like Backyard Bible Clubs, help in clothes closets, inner city churches lacking the resources to make ends meet themselves...the list goes on.

Oh, did I forget? We were REQUIRED to have a weekly Bible Study group, just the 4 of us.

I know you are sensing my sarcasm here.
I don't mean to be sarcastic or sacrilegious; I am quite grateful for the push I need sometimes to draw closer to God.  But several things happened that summer to let me know that not all baptists believe the same thing! {GASP}

I know! How small minded of me to ever believe such a thing, but at the time, this discovery was a bit mind-blowing.

I was also judged quite harshly that summer by a fellow team member and the association head who was essentially my boss.

I've always been that way and I guess I learned at a young age (try at least) to keep my emotions in check.  It's weird for me to even type that really, because I am quite an emotional woman.  I cry over tv commercials and Youtube videos and friends Facebook statuses.

Somewhere a long the way though, I learned to NOT cry in front of other people, because it would make me look weak.  So you can imagine, when something upsets me to tears (which happens often) it takes a lot of restraint to keep from crying.  Guess what my face looks like during that restraint? I'll give you a hint - it ain't pretty! Most people think I am mad, or worse, a cold b*tch.

So while one of my teammates had a very sarcastic and zany sense of humor, I didn't really appreciate being the butt of the joke so often.  It got to the point where this person told me they didn't like having to walk on eggshells around me.  I was extremely offended by that because it seemed like I was supposed to accept them 100% for who they were, but I wasn't given the same courtesy in return.

The Association head actually called me out in front of the rest of the team one time and made me feel terrible for simply expressing my concern about a mission and a last minute change we'd made to it.

It was quite a summer!

John came to see me often, and near the end of June, he came to take me out for a special occasion - dinner at a fancy restaurant back in Raleigh to celebrate our 3 year anniversary.

So he came with us to the church we were working VBS at that night and we left for a late dinner afterwards.  I felt bad because I'd been so busy, I hadn't even bought a card, much less a gift. It was an INTENSE summer job!

Let me back track for a moment...this was the same week that I had been called out by my boss.  She decided to show up at the church that night and watch our team in action; it made me very nervous!

Anyway, during dinner, I received a BOX of long-stemmed roses! Up until that moment, I'd only seen such a thing on tv or in a movie - never in real life!

He also gave me a wrapped box that I could tell was jewelry. My heart was pounding, but it was too big to be a ring box.  I opened it to find a beautiful freshwater pearl necklace.  So I felt spoiled! Dinner at a very expensive restaurant, flowers, and jewelry! It was the perfect ending to the day - or so I thought!

John had something else in mind.

After dinner, he walked me across the street from the restaurant.  Instead of getting in his car, he lead me to a courtyard, now dark but moonlit, and sat me down.  I can't remember if I actually sat on a bench or a low brick wall of some sort, but I sat - he kneeled!

Down on one knee, I have something to say, all serious, kneeling.
He took everything out of my hands, and held them in his.  At this point, I cannot remember his exact words, but I do remember how sweet they were and how romantic the whole scene was.

I cried - and then he pulled out THE BOX and I cried harder.  I thought my heart would beat right out of my chest I was in such disbelief.  And he asked, "Will you marry me?"

And without even thinking, I said "YES!"

And again, today, I must stop there.  I am learning through this process...while on one hand I am trying not to get swept away in the flood of bad memories, I am learning to be grateful for the overall outcome.  For the person that I am today, the one He is still working on, and that I couldn't be where I am now, without the where I was then. 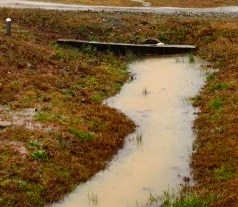 And while when it rains outside, I am ever so grateful for umbrellas to protect me and cover me, when it rains inside there is always grace in the clouds.

Thank you, Lord, that it covers me!

Posted by leslie@gleaninggrace at 12:46 PM