I have to say, I am excited to write today!

Yesterday was sunny and beautiful compared to Monday when I thought the rain might never stop and could in fact wash away our driveway!

Today, while there are clouds in the sky, and a serious chill in the air, it is still pretty and spring-ish outside! Birds are chirping and flying all over the place.  I've heard them outside my front door all morning and when I glanced out, there was a pretty red cardinal in one of my front bushes! Of course, when I opened the door to snap a picture, he flew away (darn it!).  But I did manage to catch a pic of the nest some birdies are building behind my front porch light. 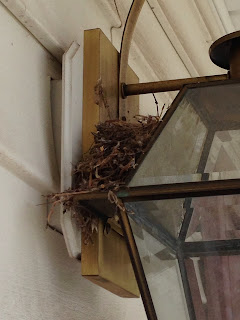 BUT today, I can see the light at the end of the tunnel named John.

Yesterday, I left with his proposal and my acceptance.  This was late June of 1996 and I still had several more weeks as part of the summer mission team in Durham, NC.

We also knew that we wouldn't be "setting a date" right away.  After all, I had at least 2 more years of college and I was only 20 years old.

I also mentioned last post that John had graduated and begun working full time back in the little hometown, we'd both grown up in. I guess life for him had changed pretty dramatically.
Working full time was already getting him thinking about getting married and starting a family.  Not that we'd never thought about this before (did I forget to mention that BIG pregnancy scare we'd had when I was still in high school? How different my life COULD be right now!).

But, as I mentioned, I still had at least 2 more years of college.  Looking at my newly declared major and the requirements for it, I knew I would probably need summer school and one additional semester to stay on track for a good GPA and graduation.

I know now that he was trying to help, but my feathers started to get ruffled when John started making plans to get me out of school even earlier.  He started making proposed course schedules for me and talking about where I could work when I moved back to that small town.

We were only able to see each other once or twice a month at this point.

I had moved into my first off campus apartment and had my own room, but still, he worked in retail management and weekends are part of that deal, so visits were few.

I was already wondering if I had made a mistake getting engaged at 20 years old. For the last 18 months we'd been living in the same city, same campus and within walking distance of each other.

Now here I was, at least an hour away from my fiancee, watching other people around me...couples...roommates...friends...neighbors...spending time together...dating...in love.  I guess it always seems that way when you are missing someone.

As time went on, though, I was getting more attention from male friends and other guys.  I was getting frustrated by John's little contact (it seemed he didn't have time for me), and every time we DID talk, it was more about how soon I could graduate and we could start planning a wedding. Yikes!

My 20 year old self freaked out! It just got to the point that I knew I had made a mistake.  I mean, if I hadn't made mistake, wouldn't I be 100% sure, with no trace of doubt?

Whether true or not, that's how I thought it should be.

I gradually pulled back more and more from the relationship until one day I called and told him he needed to come see me that very weekend coming up.
He tried to bait me into telling him over the phone what was up, but I held back most of it.  He came knowing I was scared and doubting.

Through lots of conversation and tears, I told him I just needed a break.  I didn't want to stop seeing him, I just needed to put a hold on the engagement.  John basically told me he loved me, but he wasn't really into that. Sort of an "all or nothing" deal, I guess.
We spent one last night together and when he left the next day, he took the ring with him.

I felt betrayed and heartbroken; I even wished I'd just kept my concerns to myself.  He was all I had known for most of the last 3 years and the thought of losing him forever was devastating even with the doubts I had about marrying him.

I started a very destructive cycle of dating the next boy who paid attention to me, all the while trying to stay in touch with John.  I even skipped classes a few times and drove back to our home town to surprise him at work or at home on his day off. I sent flowers, balloons, and cards.

He was so cold to me and I'm not sure what he hoped to accomplish with that, but eventually, I just gave up and moved on.

The next guy I dated was a real piece of work, but we'll save him for another day!

These are some of MY verses today! They let me know now, that I wasn't a lost cause back then and I'm not a lost cause now - He rescued me!

Posted by leslie@gleaninggrace at 11:21 PM