Day 24 {31 Days of Grace}: On proposals and berry cobbler

If I remember correctly, it was June 1st, 1999.  I was still at work in that store in the mall where I was an assistant manager in responsibility level, but still very much in training at reality level.

The phone rang during a slower part of the afternoon shopping traffic and I happened to answer, finding E on the other end of the line.

I half expected him to tell me "we need to talk;" my wounds and our awkwardness from the previous weekend's beach trip had not quite healed.

Instead, he asked me to go to somewhere with him to watch the sunset - to make up for our cancelled Sunrise Date at the beach.

I went home from work and changed my clothes, with him rushing me the entire time..."we're going to miss the sunset if you don't hurry!"

We walked a short distance around the lake and found a clearing near the water to watch the sunset.  At first, we were standing; the sun didn't seem to be sinking very quickly.  So we sat.
As we did, E reached into his pocket for chapstick (later I would learn he pulled out more than just chapstick).
As the sun sunk lower and lower, E pulled me back to a standing position to watch the finale.
As I turned back to look at him, there was something under my nose - a diamond ring!

And not just ANY diamond ring! A Princess cut diamond in a platinum setting (at the time I barely knew what platinum was)!

As I looked up at his eyes, a little surprised (because I didn't see it coming-not like that), he asked...
"So, will you marry me?"
To which I replied, "Yes!" of course!

Things got a little complicated planning our wedding, and before that, we had to tell our parents!

I'll pick up there next time...


For now I want to do something fun.

In a recent post, I talked about "Who I Am," but the truth is, other than 31 Days of Grace, I have been pretty reserved about the details of who I am on this blog.

One thing I love to do is cook! Not just cook, but experiment in the kitchen.
There is no one type of cooking I like more than another, but I think baking and dessert making was my first food love.

Yesterday, I made the best cobbler and I wanted to share it with all of you!

It started because I had some leftover cherry pie filling and a white cake mix from another project a couple of weeks ago.

Most canned and boxed ingredients are completely against everything I believe in as good and healthy food these days, but as I said, I was trying to use up some leftovers.

I had no pineapple, but I had the cherries.  I also had 2 random apples in my produce drawer and TONS of frozen berries and cherries in my freezer.

I peeled, cored, and sliced the apples and laid them in the bottom of my covered baker, covering them with the cherry pie filling I had left (maybe 3/4 cup at most). 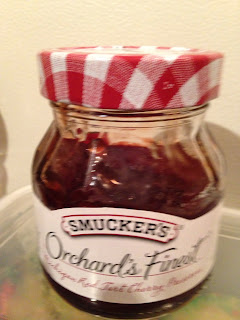 I then mixed in about 3/4 cup of these Cherry Preserves.

It didn't look like enough fruit, so I went looking for more and found this in my freezer... 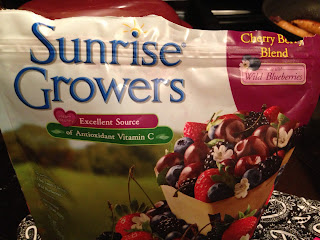 I picked out the strawberries, adding the cherries, raspberries, blueberries, and blackberries to the mix.

After mixing it all together, this is what it looked like...


Next I poured an entire DRY white boxed cake mix over the fruit (I forgot to snap a pic of this step, but I'm sure you know what it looks like).

Most of the recipes for Dump cake online called for either one or two whole sticks of butter (I know - GASP!).  I split the difference and did 1 and a half sticks cut into slices and placed evenly over the top of the cake mix. 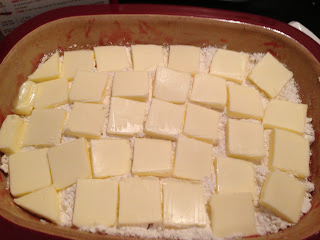 Due to the depth of my baking dish, this was not enough time, so I had to put it back in.  I covered it with foil so the top "crust" didn't get too brown.  My best guess is an hour total time, but if I were to do this again, I would make it in a 9 X 9 square baking dish or a 9 X 13 casserole.

What you got cooking?

Posted by leslie@gleaninggrace at 11:32 PM