Hey, there!
I have had a mean case of writer's block recently.  The only posts I've written have been based on prompts...someone else's subject that I just jotted down a few words about.

But today something happened that I must write about.

Sweetpea came home and asked me, “Mom, what would you do if you found out something you weren’t supposed to know and then the other person found out you found out?”

Say what?
I didn’t have any idea how to answer that, so I asked her to be more specific.
She said that Sam came up to her during the school day and told her that Tiffany was going to “ditch her.”
{I've written about this situation before, yet here we are again, just a couple of months later.}
Then later, Tiffany found out that Sam had already told Sweetpea so she came to her at recess and “dumped” her.
Sweetpea was upset and crying as she told me this.  I tried to engage her in conversation to get more details.  I told her that her value, her worth, would NEVER, EVER be dependent on what someone else said or thought about her.  God made her the way she is because He created her special.

I reminded her that she is very likeable and that she makes friends easily, as she has every year so far in school.  I reminded her of the kind things her friends have said about her or even shared with their Moms about how caring and kind Sweetpea is to people that other people are not kind to.
I told her what matters is what she thinks of herself and what God thinks of the person she is and how kind she is.
I asked her if she knew what I was saying about her was true.  She confirmed for me that she likes herself.  That’s when she brought up her birthmark on her face.  It’s a bright red spot right under her nose (almost like a port wine stain, but it's a different kind) and I have called it different things at different times - sometimes an "Angel Kiss" sometimes a "special spot.".  She told me that Tiffany (as well as some other friends at school) have asked her about it and suggested she get it “paled” or taken off.  Sweetpea said she told them she didn’t want to do that; it was part of her and she liked it because it made her special {YAY! This made a Mama feel good!}.

I confessed to her that her Dad and I had considered laser treatments before, but we wanted her to know that God gave her that mark for a reason – it set her apart.  We felt like it would be refusing a gift from God if we removed it; that it might hurt Him just like it might hurt her earthly Father’s feelings if he gave her a gift and she threw it away. {Not to mention that it might give her the wrong impression about appearance and true beauty!}

I shared with her some events that happened to me when I was in second grade – things that I now know were bullying  - by other girls in my homeroom class.  In that case, I knew the girls who picked on me were jealous.  I got to leave the classroom for academically gifted periods and that’s when they stole my notebooks and wrote mean things on them.   I was so hurt by it and it was essentially the last straw for my Mom.  She called the teacher and the leader of the bullying got in a lot of trouble the next day at school.   She was in tears by the time the teacher called me into the hall and made her apologize to me.  To this day, I don’t know what that teacher said to her, but the entire situation was a little more drama than I would care to repeat.

I asked Sweetpea if she thought Tiffany was mad or upset about something? She said she wasn’t sure.
So I said that sometimes anger comes as a result of other emotions – disappointment, fear, sadness.
That’s when saw the light bulb; Sweetpea said that the last time she spent the night with Tiffany, Tiffany shared with her that she was really sad.  She said it made her really sad that her parents would “bicker” every time they were together {this girl's parents split up over a year ago; they are separated and Tiffany spends time mostly with her Mom visiting her Dad on Wednesdays and weekends}.

I told Sweetpea that often when people are hurting inside, they tend to take it out on other people.  I suggested that we pray for the situation and for Tiffany, to which she quickly nodded in agreement.

It's not a great situation to experience with your daughter.  It was really hard for me to talk to her because I was crying almost as hard as she was.
Later she asked me, "Mom, why are you crying too?"
I told her one of the hardest parts of being a mother is trying to keep your kids from getting hurt.  Remembering the hurt that other girls inflicted on me, makes me want to keep Sweetpea protected from all that.
I know I can't, but I am so grateful I could be honest and open with her about it.  We had a great talk and she impresses me so much with her maturity on some matters.
Next week, we celebrate her 9th birthday - she is growing up way to fast.
Days like today, give me a little confidence that I am doing something right.
And all us Mama's need that once in a while, right? 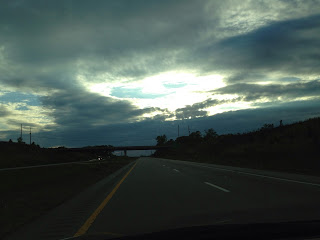 Posted by leslie@gleaninggrace at 11:35 PM