For some reason, we were out of school that day - could've been a "snow" day or a teacher workday - I'm not sure.
I do know I was over at the neighbors' house playing and we happened to be inside when the shuttle launch was on t.v. 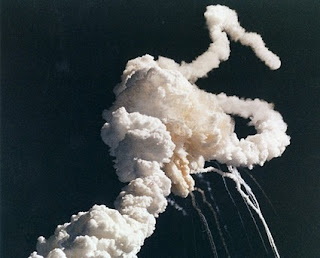 I may not have mentioned this before, but from the time I was a young child until some point in college, I seriously wanted to be an astronaut.  My plan after HS was to major in Aeronautical Engineering and then enter the Air Force to gain flight and piloting experience.

If you read my {31 Days of Grace} series, you know I ended up following a boy to college (the college I planned to go to anyway, but none-the-less, a BOY changed my plans) and changing my mind about engineering as a major!

I don't know if, at 10, I really understood the magnitude of the Challenger Explosion.  I thought it incredibly sad, but if anything, it made me want to be a space explorer even more!

I remember praying in those first few moments, that it wasn't what it looked like.  That the entire spaceship had not just exploded before our eyes...that the astronauts (and one teacher) on-board had not just died in front of 1000's of eyes.
I remember praying later for their families and all the children who were watching when their teacher, Christa McAuliffe, become the first teacher in space.

It definitely left a mark in my memory! 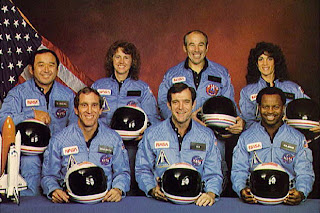 If you'd like to read more about it, even hear the address President Reagan gave following the tragedy, check out this site (also where I got the pictures).

If you've read more than one post of mine, you know I like to stretch the rules just a smidge!

So there are actually 2 news stories from my childhood that I will never forget, and the second is this one:

My mother was a HUGE Valvano fan.

Remember when he led the NC State Wolfpack to a national championship in 1983? NC State would become my Alma Mater and my husband's.

And who could NOT get emotional and be inspired by the infamous ESPY Speech in March of the same year he died?

Who can forget these words and quotes?

The day he died, we heard it on the radio. My Mom and I were driving in the car and people began to burn their headlights in his honor.

I remember my Mom cried.  At the time, I thought it was sad, but I didn't understand her tears - after all, she didn't KNOW him.

But now, now I understand.

Someone with that much inspiration and determination just couldn't stay here on earth as long as we wanted him to.

What news stories do you remember from your childhood?

1.) How old were you? Share one of the first news stories you remember caring about.

Posted by leslie@gleaninggrace at 2:14 PM